What is VeeFriends? – Asia Crypto Today 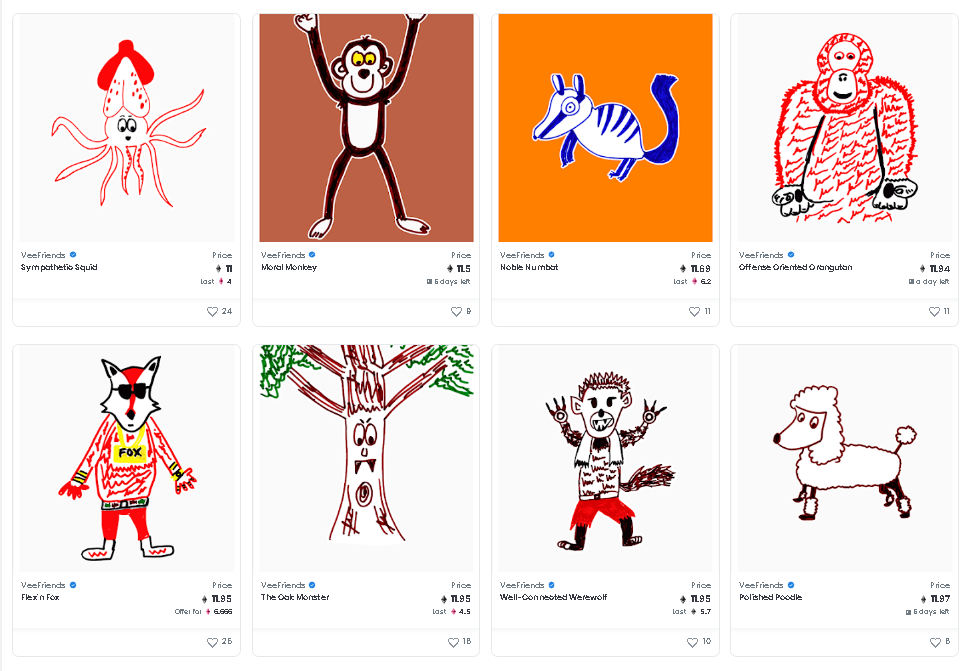 VeeFriends is an NFT collection of 10,255 animal-inspired visuals hand-drawn by Garyvee that runs on the Ethereum blockchain.

Gary Vaynerchuk, a world-renowned serial entrepreneur, and speaker expect that the non-fungible token’s (NFT) era as purely collectible assets is coming to an end. According to him, the world will soon demand NFTs that can offer valuable utilities such as services and experiences; in other words, clear usefulness in one’s life. And this belief was showcased by his much anticipated digital asset collection, which is packed with many utilities for holders online and offline.

Gary Vaynerchuk, more popularly known as ‘GaryVee,’ knew that the only way to leverage the evolution of technology is to be part of it, just like what he did in the early days of the internet and on its eventual progress to web 2.0. Now, he is doing the same proven method by learning web 3.0, not as a bystander, but as an actual practitioner, through his NFT collection. He is doing this not only to learn but be an educator for everyone who intends to enter into this new space and tap its hidden potential.

VeeFriends is an NFT collection of 10,255 animal-inspired visuals hand-drawn by Garyvee that runs on the Ethereum blockchain. The collection, minted on ERC-721 compliant contracts, is divided into three categories, called ‘Access,’ ‘Gift,’ and ‘Admission,’ each with different quantities and unique offerings. All these tokens will offer holders three-year access to Vaynerchuk’s annual ‘Veecon’ Conference.

The collection’s official website reminded holders that while the VeeFriends NFTs would remain forever, their additional underlying benefits, such as admissions, access, and gifts, will only last until May 4, 2024. VeeFriends also clarified that there is no royalty collection mechanism in the project due to regulatory and legal reasons. Furthermore, holders cannot sell or distribute any merchandise with VeeFriends designs and characters on them, as these elements are the intellectual property of the collection.

The collection is now available on OpenSea and Rarible, and every purchase of VeeFriends on these marketplaces gives the project a 10% royalty, of which 1% would go to Gary’s chosen charity.

To combat the environmental impacts of NFT transactions, it has also pledged to donate to decentralized organizations (DAOs) that focus on renewable energy such as solar and wind power. Furthermore, it will support the development of ETH 2.0, which will soon use the more environment-friendly Proof-of-Stake (POS) mechanism.

Gift Tokens, which has 555 supplies in the collection, opens holders to gifting privileges personally created by Gary Vee himself.

Admission Tokens, which have 9,400 supplies, are divided into two levels called ‘Core’ and ‘Limited,’ each equipped with different levels of rarity and collectability.

“GOO,” which stands for ‘Gary’s Original Ownership,’ is a set of tokens made by the global icon as a personal collection, each pinned with a GOO Badge, to publicly authenticate his original ownership to incoming holders.

VeeCon is a four-day mega-conference that centers around NFT, pop culture, business, entrepreneurship, and marketing. The event, exclusive for VeeFriends holders, had its inaugural run last May 19-22, 2022, at the U.S Bank Stadium, Minneapolis, and was dubbed the first-ever NFT-ticketed event.

Multiple VeeFriends holders also had the privilege of having more than one admission to the event. The number of NFTs they own determines the number of passes they will get for the event. For example, Three VeeFriends = Three passes.

Copied from a Children’s Book?

Last month, the collection, or rather Gary himself, was caught in a controversy involving one of VeeFriends’ NFTs having significant similarities with the characters of a specific children’s book.

In a social media post, two of his NFT characters, named ‘Determined Dolphin’ and ‘Gratitude Gorilla’, were paired beside two animals seen in the ‘Treasure of Life,’ a series of children’s books authored by Karen Ritchie.

These animals have the names ‘Determination the Dolphin’ and ‘Gratitude the Gorilla’, which, at first glance, seem to be the direct inspiration of Vaynerchuk, which he immediately denied. He clarified that the close similarities between the names are mere coincidence, and if there is any inspiration he should credit, it is the children’s book called ‘Sweet Pickles’, where he learned English.

Fanatics Collectibles has collaborated with VeeFriends to launch ‘zerocool,’ the first trading card set that highlights the biggest icons in entertainment, pop culture, and the art industry. Collectibles is a subsidiary of Fanatics, an American sports retailer that sells merchandise, including sportswear, equipment, and trading card games.

Johnnie Walker, a globally recognized whiskey brand, has partnered with the VeeFriends through its parent company DIAEGO, Scotland’s biggest exporter of Scotch whisky. Through this collaboration, holders of the “Gift Goat NFT,” the collection’s Gift Token, will receive unique gifts sponsored by Johnnie Walker. It has also offered holders a special activation at the VeeCon event that gave them a more immersive experience during the conference.

Gary Vaynerchuk has integrated a series of carefully selected utilities into his collection and leveraged his star power to help it become one of today’s most successful NFT assets. While a world of 100% utility-based NFTs is not yet here, his VeeFriends collection has already given us a glimpse of what this future would look like, which, looks exciting.