How to Master Medieval Mayhem in Rustler

Welcome to the Middle Ages of Rustler, a grand theft horse experience that’s available today for Xbox One and Xbox Series X|S. While it may lack some of the modern conveniences we’ve grown accustomed to, it certainly has its charm. For our anti-hero simply named Guy, it represents a booming land of opportunity, and with the help of his friend Buddy, he will lie, cheat, and sneak his way into the Grand Tournament – a major event held across the kingdom in which the ultimate prize is the princess’ hand in marriage.

Guy isn’t bound by some ancient code of chivalry and is determined to use any means necessary to win over the kingdom, even if it means tearing it down in the process. It’s a long way to the top, so here are some tips on getting started in your medieval escapades.

As you complete quests, find collectible horseshoes, and progress through the story you will earn skill points, spendable currency which can be used to purchase permanent upgrades for your character. These include passive bonuses such as higher max HP or improved stamina regeneration, as well as active skills like the ability to summon your horse from anywhere or picking up items without dismounting.

With so many to choose from, it can seem overwhelming on where to spend your first points. We suggest investing some early points into a higher health pool, which should make some of the early missions and side quests a bit easier being able to tank a few extra hits when you encounter the guards, who aim to lock you away for causing any misdeeds. The extra bit of health will also make some mini-games a bit easier to complete without dying.

Not all horses are created equal. These mounts serve as the primary mode of transportation in Rustler and have some characteristics that set them apart. Slimmer horses are faster and more agile, while armored horses will absorb more damage before going down or fleeing. Keep this in mind before charging into battle on horseback or heading to the track to race for some extra cash.

Fortunately, you can “borrow” a different type of horse parked around the map at any time, just don’t get caught while doing so. If you have the “cops” hot on your trail, you can always visit a “Pimp-a-Horse” location to give you and your mount a fresh look, throwing off those in pursuit and clearing your wanted status and bounty.

Mini-Games Are a Good Distraction

There is a plethora of side activities that are easy to miss across the kingdom, but it’s worth it to stop by and try them out. Horse racing will help familiarize yourself with the terrain and teach you the more advanced techniques of horseback riding, and you can earn some extra cash just for participating.

If you are ready for a bit more action, you can try your hand at the great medieval pastime of jousting or step into the dirt arena to test your might in some traditional MMA-style fights. Many of these mini-games will help prepare you for the real thing by improving your abilities,  providing valuable skill points, and an influx of cash to spend on upgrading Guy.

There are a huge variety of traditional and wacky weapons waiting to be discovered in Rustler, and whether you procure these from the body of your enemies or purchase them with hard-earned cash, they will be yours to keep for good. A halberd gives your great reach and damage at the cost of a slower swing speed which is great for keeping tough enemies far away but isn’t nearly as effective at close quarters combat with knights who rush you down.

Additionally, while the tried-and-true sword and shield give you good all-around defensive and offensive options, but its lack of range becomes an issue when riding on horseback, where a spear, crossbow, or lance excels. Each weapon has its pros and cons, so experiment and find the one that works best in each situation.

There is a lot to do and discover in the absurd open world of Rustler, so explore, experiment, and don’t be afraid to go a little crazy and have some fun at others’ expense. Rules were meant to be broken after all. Rustler is available today for Xbox One and Xbox Series X|S. 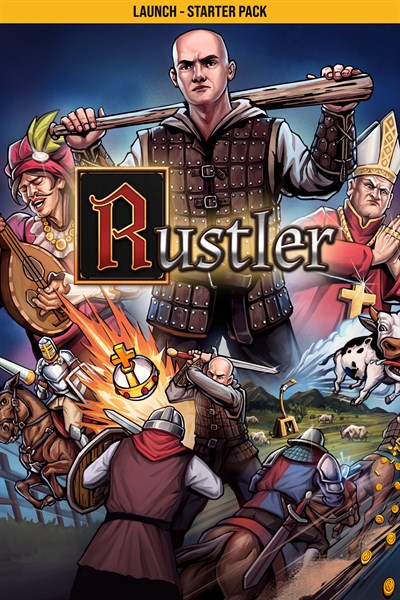 “Grand Theft Horse – Win the Kingdom or Tear it Down
Classic GTA-gameplay gets a medieval makeover. The Great Tournament is offering the hand of the princess as a prize. Go from local brigand to champion. Or don’t. Guy (that’s you) and his friend (conveniently named Buddy) are out to win the prize with holy hand grenades, pimped out horses, and their own personal minstrels in tow. It’s madness and mayhem with true comedic flair.

 Grand Theft Horse: Wreak havoc in a medieval world inspired by classic GTA gameplay. Use swords, spears, turds – whatever will get the job done!
 Wear the Crown: As a poor peasant, you’ll need to get creative in order to win the Great Tournament. Form weird alliances, double cross your foes, and dig up dinosaur skeletons (because, why not?).
 A Medieval Sandbox: How you progress is up to you. Spend your time completing quests, wreaking havoc and having a laugh at the expense of others!
 A Lot of Horsin’ Around: Shoot cows into the sky, drag your neighbors through the mud, toss some holy hand grenades, or draw fancy pictures in the field with a plow.
 Minstrelsy of Power: Hire a musical companion to play the tunes you like and add a powerful soundtrack to your adventures.”